A little while ago, I had the special pleasure of photographing my sister and her growing family. They had just welcomed their youngest, Kaiya, and I was honored to take their first full family portrait.
Michele and her boys, Quincy and Kaden, were some of the first people Chrissy and I took photos of while we were building our portfolio. In fact, one of our packages is named after Quincy in honor of them. One thing is for sure, those boys love the camera!
Such a sweet, good looking family.

With this much cuteness, they sure have their work cut out for them!

Thank you Michele and family for inviting me into your home to photograph your lovely family and especially your newest addition. I look forward to many more awesome photo shoots!
On a somewhat unrelated note...little girl clothes are SO FRIGGIN CUTE!

I have a certain fondness for trees. I think I started climbing trees before even turned 5. I have the dislocated shoulder story to prove it. My appreciation of trees took root (haha, no pun intended...or was it?) in upstate NY at my grandparent's house. They live on 40 acres in NY and the majority of those 40 acres is untamed woods. They have these ancient maples trees on their property that scale hundreds of feet. They are easily 4 ft in diameter (or more). The ones closest to their house (which has been cut down since I left) was my favorite...mostly because it had a low enough branch for me to climb on.

Notice how the trees tower over my grandparent's house and barn.
With my fondness for trees and their ethereal splendor, I was excited about this challenge. The very first photo that popped into my head was one I had taken a couple weeks ago at the Garden of the Gods in Colorado Springs, Co. It was such a gnarly tree. It stood there mostly by itself, no other trees managed to grow around it. I thought that was rather poetic.
With a little spiffing up with photoshop (I'm beginning to like that too much, I think), here for your viewing enjoyment is my submission to this Photo Friday challenge.

As always, please don't forget to go VOTE!!!!! Does anyone ever vote? I usually forget to myself.
Tune back soon for photo teasers from the Nansteel's photoshoot!
Thanks for reading!
Liz DiNatale
www.oakcityphotographync.com
Shared by Oak City Photography at 11:23 AM No comments:

I had visions of nakedness and silhouettes when I first thought of what picture would be best for this challenge. After a while, I thought it better to not post a naked body to the general internet. Especially one of myself or someone I know. It just so happens that I had the perfect, non-naked, picture for this challenge.
What better way to represent the human form that the silhouette of a woman and her very pregnant belly? What is a more basic and natural "human form" that child bearing? Well at least that's what I thought. So I took one of Chrissy's maternity photos that I already loved and made it edgier and more emotional with some fancy shamncy editing. Here is the result:

So if you find that you like this photo, please go vote!
This coming weeks challenge is "Trees" I have a great photo I took at the Garden of the Gods in Colorado that will be perfect! I might not be able to wait until Friday to post it.
News for Shades of Red: I've revamped our website! I've changed our packages and we're currently running a special. I'll be heading to Clayton, NC this weekend to take my new niece's first professional photos. I'm sure she'll have many more as she grows up! Check back for those photos.
As always, thanks for reading. Have a great weekend!
Liz DiNatale
www.oakcityphotographync.com
Shared by Oak City Photography at 5:57 AM No comments:

It turns out that the Photo Friday challenge for this Friday is "Best of 2010". This puts me in a pickle as I've already done a recap post. I can't use one of those photos again, that would be lazy. I went about choosing my "best" of the batch by going through each of our portfolio albums and picking my favorite and then picking my favorite of those. To be fair to all of my favorites, I'll show you my picks from each one. Plus it will make this post longer. As a disclaimer, I only used photos I know I took unless otherwise stated.
Best Friends (aka Pet Photography):
Arguable the photography we practice the most because well, we have 5 dogs between the two of us. It was hard to pick from this batch.
I chose this photos first of all because I can remember taking it. Secondly, I loved this dogs eyes. They're so dynamic.

Life-style & Family Portraits: This album acts as the catch all for photography that doesn't involve animals, maternity/infants, weddings or engagements.
This was a tough pick, I really like a lot of photos in this section. I eventually went with this photo because it is pretty recent and I just love the relationships between husband, wife and baby in this photo.

Maternity & Infant:
Eep! We don't have any recent maternity or infant photos in our album! I'll work on that I swear! My family just welcomed the newest itty-bitty addition and I'm looking forward to taking some of her first professional shots!
Couples & Engagements:
Ok I'm cheating a little on this one. This is not a photo that I produced. Chrissy was the mastermind behind this gem.
I'm trying not to be biased when I pick this photo. This is just some great work. The depth of field is grabbing, the colors are pure...the subjects are a bit odd, though. ;-)

Weddings:
Last but not least, we come to our wedding photography. This is some of the most enjoyable work we do (in my humble opinion). It is so great to get the behind the scenes look at the makings of a wedding and then capture the precious moments for a new couple. ::Sigh:: Makes me all warm and fuzzy inside.
On that note, this is also the photo I chose for my Photo Friday submission. I feel like this photo tells a story. It's a moment captured in time, to last an eternity.

I'm not exactly sure if this is the very best photo we or I took in 2010 but it moved me the most tonight. I hope you all enjoyed my second trip down memory lane. I'm looking forward to a big 2011, I hope you all are as well!
Thanks for reading!
-Liz DiNatale
www.oakcityphotographync.com
Shared by Oak City Photography at 7:05 PM No comments:

2010 was a busy year for me on a personal level. The whole getting married thing kind of had a bit to do with that. Before I fully embrace 2011, I'd like to revisit the photography of 2010. In chronologicalish order.
In February of 2010, with the weather just beginning to warm and my mental to-do list hinging on Save the Dates going out, I badgered Chrissy into braving a chilly day for mine and Steven's engagement photos. This was the first time that I had been on the other side of the camera. It was a unique experience and I had a lot of fun! We had several favorites from the lot but this particular picture still reins supreme (at least to me).

This was also the day that Chrissy and I took our "About SOR" page photo, courtesy of Steven.

A hop skip and a jump forward we get to May 2010 and my cousin, Jesse's wedding. As their wedding gift, I shot their photography.
This was the first time I had seen my cousin (and his family) in years and the first time I was meeting his wife to be. It was a joyous family reunion. I have always been close to Jesse, partners in crime more or less, and it was great to see him marry such a nice (and beautiful!) girl. Their wedding was simple and sweet and I was so happy to be a part of it.

In June of 2010, we were hired to photograph three lovable pups. This photo shoot was bittersweet, the matriarch pup had recently been diagnosed with a terminal illness and would likely pass soon. We were honored to capture her likeness for her owners - something for them to cherish.

They had also just gotten a puppy. He was beyond cute and so well  behaved for a pup.

With my wedding fast approaching, the photography hobby-job wasn't foremost on my mind. In August, Chrissy put me in front of the camera again and took my bridal portraits at Second Empire in Raleigh. I kid you  not, these came out better than my wedding photography pics did. I think the indoor light is key to really capturing the detail of my dress.

But of course sometimes it's better to lose detail for drama. In this case, I love the drama.

In the early part of September, as a belated gift to my parents, I spent a half an hour chasing them around the beach, telling my Dad to stop making faces. Oh and I took a couple photos. 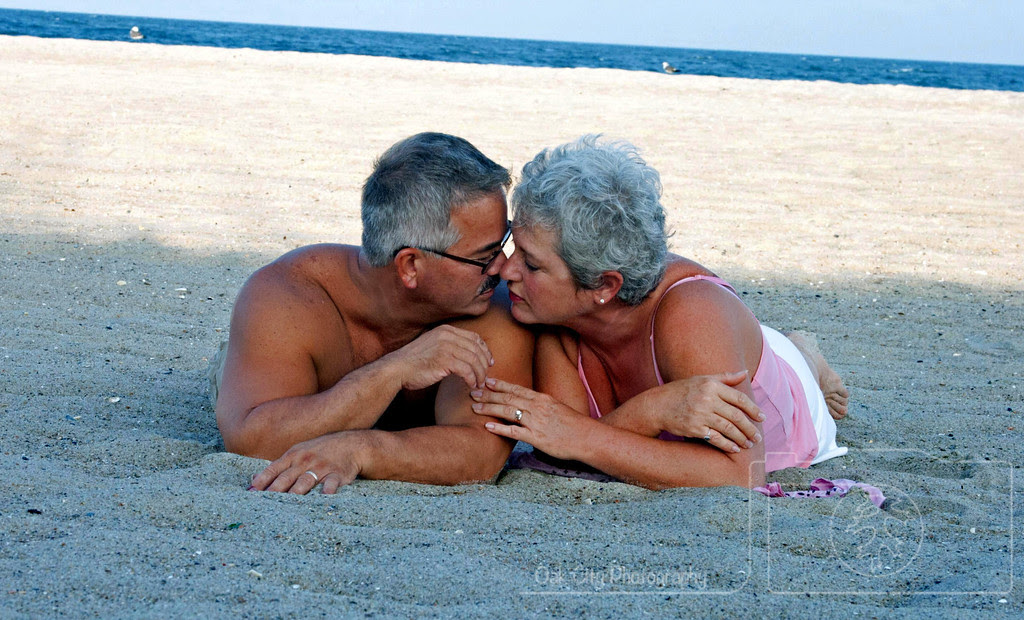 So far you've probably already seen at least half of these photos before. That is assuming you've been reading my previous posts. But as someone wisely told me once, no one should ever assume anything. In which case, please feel free to read back through my previous posts.
I do have some new material to share with you today. In the end of November, when it was bitter cold out, I held two mini photo shoots at the art museum in Raleigh. I don't have any photos available at this time from the first photo shoot, I'll have to post those next, but I can show you a few from my second couple. Remember Laurissa and Doug Cubbage from 2009? Here they are for round two of the holiday photo session!
Laurissa and Doug had just welcomed their son, Jackson, in August of 2010. He was a good sport, but it was so cold that day and the wind was unforgiving; we only stuck around for about 15 minutes. These guys are such great subjects, that's all we needed to get a few really awesome shots!

I love this shot. Everyone say, "Hi Jackson!" 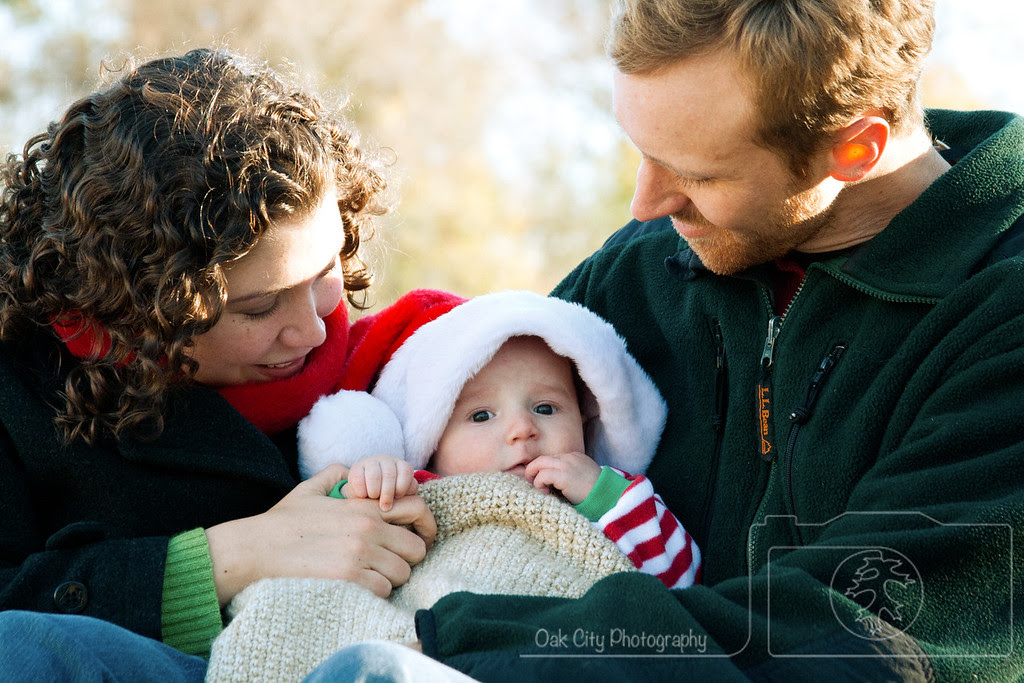 2011 brings all sorts of new opportunities and we're excited to get started. Keep checking back often; one of my new  years resolutions is to start participating in the Photo Friday challenges again!
As always, thanks for reading!
Liz DiNatale
www.oakcityphotographync.com
Shared by Oak City Photography at 8:32 AM No comments: